For years, Albania and North Macedonia have been waiting to move closer to the EU. Now that an obstacle has been removed, things are set to move ahead quickly. In July, a historic moment was celebrated. Time for a recap. 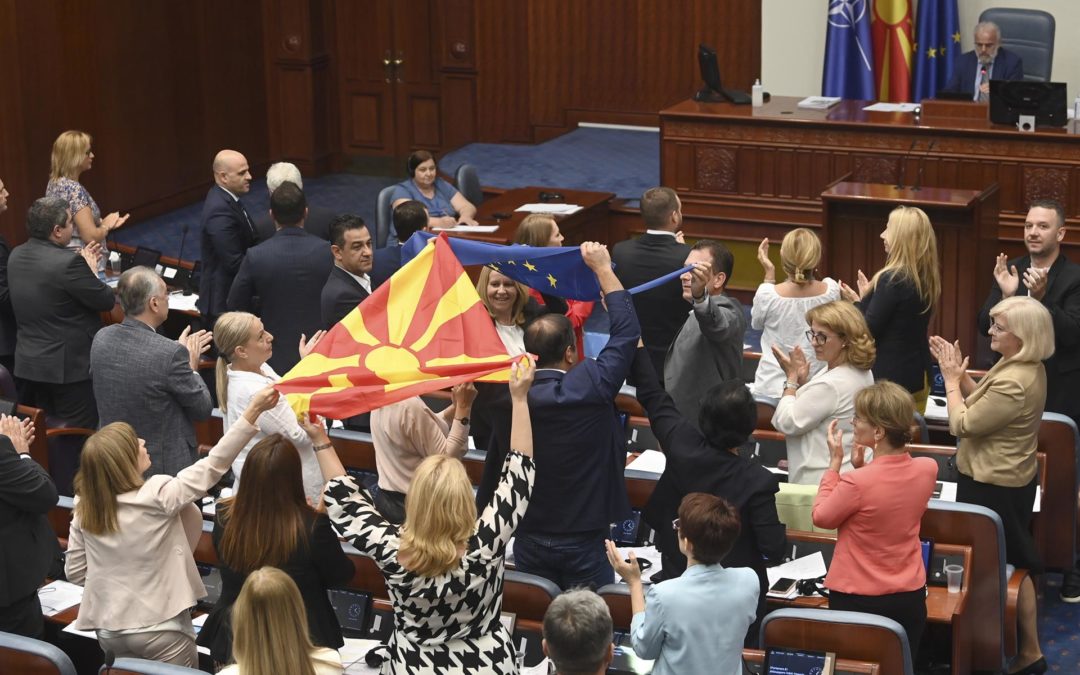 The European Union has begun the long-delayed accession negotiations with North Macedonia and Albania. The prime ministers of the two countries were welcomed for the first time to intergovernmental conferences in July in Brussels. These marked the start of the negotiation process.

Macedonian head of government Dimitar Kovačevski said that a dream his country had been having for three decades is now within reach. His Albanian counterpart Edi Rama commented that it is with joy and pride that Albania is now sitting at the big table of a united Europe to start membership negotiations. “We know that this is not the beginning of the end. This is only the end of the beginning.” EU Commission President Ursula von der Leyen and the German government described the move as historic. Von der Leyen stressed that North Macedonia and Albania had worked hard for this step.

North Macedonia, which has a population of about 1.8 million according to the latest census, has been a candidate for EU accession since 2005, while Albania, with about 2.8 million citizens, has been a candidate since 2014. While Albania celebrated that the process is finally starting, the taste for North Macedonia is bittersweet: A sizeable part of the population and political forces deem the price for starting EU accession negotiations as being too high.

North Macedonia was first blocked on its path into the EU by Greece over a name dispute. It accused its neighbour of appropriating Greek symbols since Greece has a region called Macedonia. This stalemate was eventually overcome with the Prespa agreement, signed by Athens and Skopje in the summer of 2018. It led to the renaming of the then Former Yugoslav Republic of Macedonia to North Macedonia. Although the agreement opened the doors to NATO for North Macedonia, talks with the EU were a different story.

The intergovernmental conferences (IGCs) to start accession negotiations with North Macedonia and Albania were actually supposed to be organized as early as 2020. However, the EU member state Bulgaria blocked the necessary decisions because of a dispute with North Macedonia. Among other things, the dispute concerned the interpretation of the partly shared history as well as the rights of ethnic Bulgarians in North Macedonia and the language. On July 17, both sides signed a protocol to settle the dispute.

The solution came through a proposal by the French EU presidency, supported strongly by Albania whose negotiations talks were on hold as well, which led Sofia to drop its veto. The dispute, deeply rooted in history and cultural identity, strongly divided Macedonian society. What came to be known as the “French proposal” in North Macedonia, included some of the main demands of Sofia, such as the introduction of a bilateral protocol in the EU negotiating framework, dealing with the “shared” history of both countries, as well as the inclusion of the Bulgarian minority in the Constitution of North Macedonia. But the most difficult issue was that of the Macedonian language, which Bulgaria considers to be a dialect of its own tongue. A key issue for Bulgaria was to protect the rights of the Bulgarian community in North Macedonia.

The French proposal was initially rejected by the Macedonian government in June, but accepted by Bulgaria on June 24, 2022. To bring North Macedonia around, the French presidency worked out a number of amendments, most notably pertaining to the bilateral protocol and the language, which allowed the Macedonian government to accept the deal. This also unblocked Albania’s path, which is tied to that of Skopje, at least at this stage. The modified negotiating framework doesn’t explicitly mention the controversial bilateral protocol any more, and both countries may make a unilateral declaration regarding the language.

The Prime Minister of North Macedonia, Dimitar Kovačevski, declared on July 20 that “finally, after 17 years the process of accepting North Macedonia into the big European family has started. We opened a new chapter, a European chapter that will bring quicker development, prosperity and stability”.

Freeing the path to EU negotiation talks undoubtedly poses a political challenge. The required constitutional amendments that would include the Bulgarian minority in the constitution, require a two-thirds majority in parliament. This cannot be done without the opposition’s votes.

Hristijan Mickoski the leader of the biggest opposition party, the right-wing VMRO-DPMNE, said that the modified proposal still includes the same Bulgarian demands. “Accepting such a proposal means accepting Bulgaria’s demands to change our school books,” he said, and added that the text also means that North Macedonia “accepts that the Macedonian language is a dialect of Bulgarian”. The opposition staged numerous protests against the deal, some of which turned violent for days in July.

Somewhere between the triumphant tone of the government and the doom and gloom of the opposition, some non-partisan voices, such as that of Dragan Tilev, long-time civil servant in the Secretariat for European Affairs, may be the most balanced. In an interview with MIA, Tilev declared:

“It’s evident from the conclusions of the Council and the statement of the EU officials that the negotiations will not proceed as long as the constitutional changes do not take place. It is a huge burden for our society and a big political challenge, which should not be allowed to simmer for long.”

During the intergovernmental conferences in Brussels, the guidelines and principles for the negotiations were officially presented to the two candidate countries. On the basis of these, the EU Commission could now begin the so-called screenings. In this process, the authority examines the extent to which the candidate country’s national law deviates from EU legislation and thus requires adaptation. Following the screenings, the Commission can then propose opening so-called negotiation chapters. For the recommendations to be implemented, a unanimous decision by the EU member states is required. Overall, the negotiation process can take many years and can also be stopped again if problems arise.

North Macedonia must now amend its constitution to implement the agreements reached. Specifically, this involves the official recognition of Bulgarians as an ethnic minority group in North Macedonia.

This article is published Fridays. The content is based on news by agencies participating in the enr.